To help the world rediscover the power of Redis, Redis team published a magazine focusing on the idea that even the things you know can be more powerful than you realize. Check out the premiere issue now!

It’s my great great pleasure to introduce Rediscover Magazine. The team at Redis Labs created this ambitious publication to highlight the concept of “rediscovery”—the idea that even though you may think you know what a person, product, technology, or idea is all about, there may be much more there than you realize.

Not surprisingly, Redis itself was the inspiration for this idea. Many developers, architects, and DevOps professionals know Redis as a great caching solution – a fast and cost-effective way to optimize data infrastructure performance. But as software engineers and architects take a closer look, they’re rediscovering the full power of Redis as an ultra-fast, super-scalable, highly available (five-nines uptime!), developer-friendly tool for building applications for the digital economy. Importantly, it’s not just that Redis has grown and improved over the years, though of course it has – rather, many of those capabilities have been there for a long time, even if we didn’t always see them or recognize them. 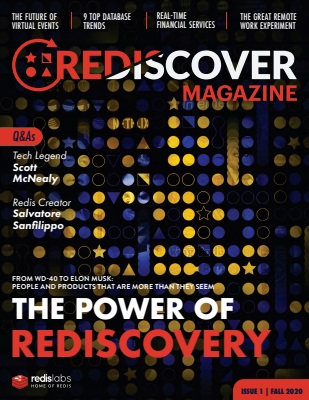 I’m about to tell you about some of the informative, engaging, and surprising stories in the premiere issue, but right about now you may be thinking: “What!?! A magazine? In 2020? What are you thinking?”

Well, bear with me for a moment, and perhaps I can convince you that this actually makes sense. You see, it’s no accident that we worked to capture the spirit of rediscovery in a magazine, available both digitally and in print. The rise of the web makes it easy to overlook the power and excitement of a compelling story presented in a beautiful and engaging visual environment – something that magazines have always done extraordinarily well. In fact, I spent the formative years of my career writing and editing computer and technology magazines, so I was super excited to rediscover the art of storytelling in this time-honored format.

Of course, Redis is far from the only thing ripe for rediscovery. In our cover story, “The Power of Rediscovery” acclaimed writer Don Steinberg takes an incisive and amusing look at everything from WD-40 (not just a rust-prevention solvent but an all-purpose lubricant with literally thousands of uses) to Arnold Schwarzenegger (not just a body-builder, he had what it takes to become a movie star – and then Governor of California). We think you’ll be surprised by the choices, and their stories.

And that’s only the beginning. Rediscover Magazine also includes important voices like Redis creator Salvatore Sanfilippo talking about the early days of Redis, the evolution of open source software, and much more. Silicon Valley legend (and long-time Sun Microsystems CEO) Scott McNealy shares tips on managing through a crisis. Leading venture capitalist Enrique Salem at Bain Capital Ventures shares a story of one of his portfolio companies that is rediscovering the power of its own technology. Analyst Rachel Stephens from RedMonk rediscovers the potential of the Markdown language. And Redis Labs co-founders Ofer Bengal and Yiftach Shoolman offer unique perspectives on remote work and implementing artificial intelligence, while some of our company’s women leaders share management tips.

But wait, there’s even more! There are also stories on the future of virtual events, how to become a real-time financial services company, and top database trends, so be sure to check out Rediscover Magazine for yourself.